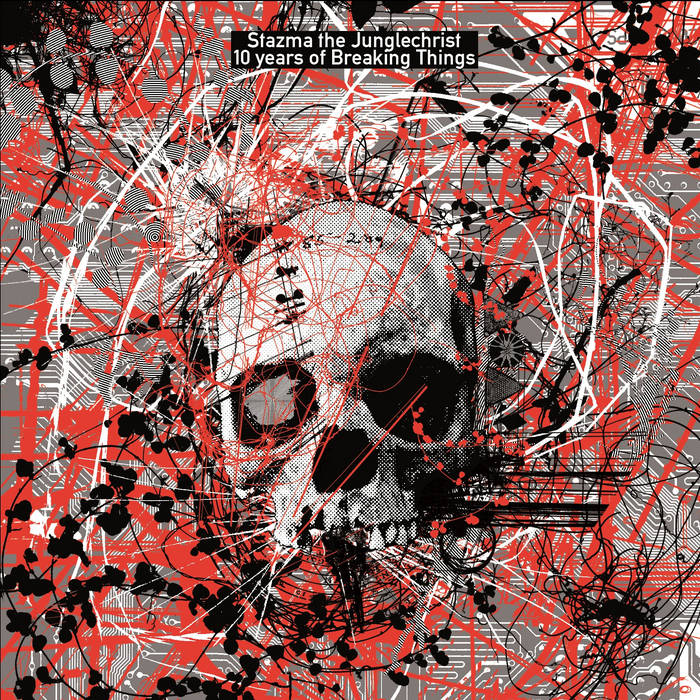 When I think about my top 10 breakcore artists, Stazma the Junglechrist is definitely on that list. Not because he usually performs shirtless, sporting an old ladʼs kangol hat. But, because he really is just a great musician and sound engineer. I remember in 2008 playing some show in France, and meeting Julian for the first time. A bunch of people from the audience jumped on stage and started moshing during my set. We immediately clicked and since then have been making music together. I think what attracted me to Stazmaʼs music, is that it really encompassed all the things I love in electronic music. From his catchy melodies, great song structure, neurotic drum edits, challenging tempoʼs and
overall consistency in material. His styles and ideas can work at any tempo. From slower tracks like, “Mutinator” off his Repeat Eater alias, to the insanity of “Drunken DSP” off his Peace Off release. Over time Julian has started using modular synths and outboard gear in his music making process. As a long time listener, you can really hear the difference with his new set-up. Heʼs definitely managed to combine both worlds seamlessly in his new tracks. From using strange de-tuned modular synths patches, too routing crazy signal chains, and creating bizarre sound design. I think his Repeat Eater side project, and his most recent PRSPCT release, is a good example of whatʼs to come from Julian in the future.
- DJ Skull Vomit

I've known this guy since he was first getting his start. in fact he drove bong ra and me a few hours to another show after a gig and made us listen to his jungle mix he had just made the entire time. it's funny because when i saw him again, i remembered him from not only his mix, but also the fact that he had his heart and soul into the music. it's been amazing watching him grow and be one of the key guys in the scene
- Enduser

'I've had the pleasure of working with Julien now for a number of years I think he's the producer I've shared the stage with the most. There was a period of a couple of years where we played the same parties it was a riot. Always killer live sets and his albums and EPs are wild.The Junglechrist has a real sense of precision engineered party starting. May he never surrender! '
- Gore Tech

Stazma Oh Stazma !!! He's the one who was born with a controller ....and no t-shirt ,but he had a hat , a French beret. No one knows much about his youth , the legend said he was raised at the back of a truck by two ravers who found him down the river near a cancelled free party.One day he finally escaped and travelled across the desolated lands with his controller ,he multiplied the drum breaks and the acid still runs in his veins. He's still around , so we won't have to wait for his return . All hail The JungleChrist !!! To be continued ....
- Monster X

Stazma the junglechrist, the master of acid breakcore. We met and played together for the first time in 2008 in a Peace off night, And since this one, we are '' brother in blood''. Long life to my mate
- Ruby My Dear